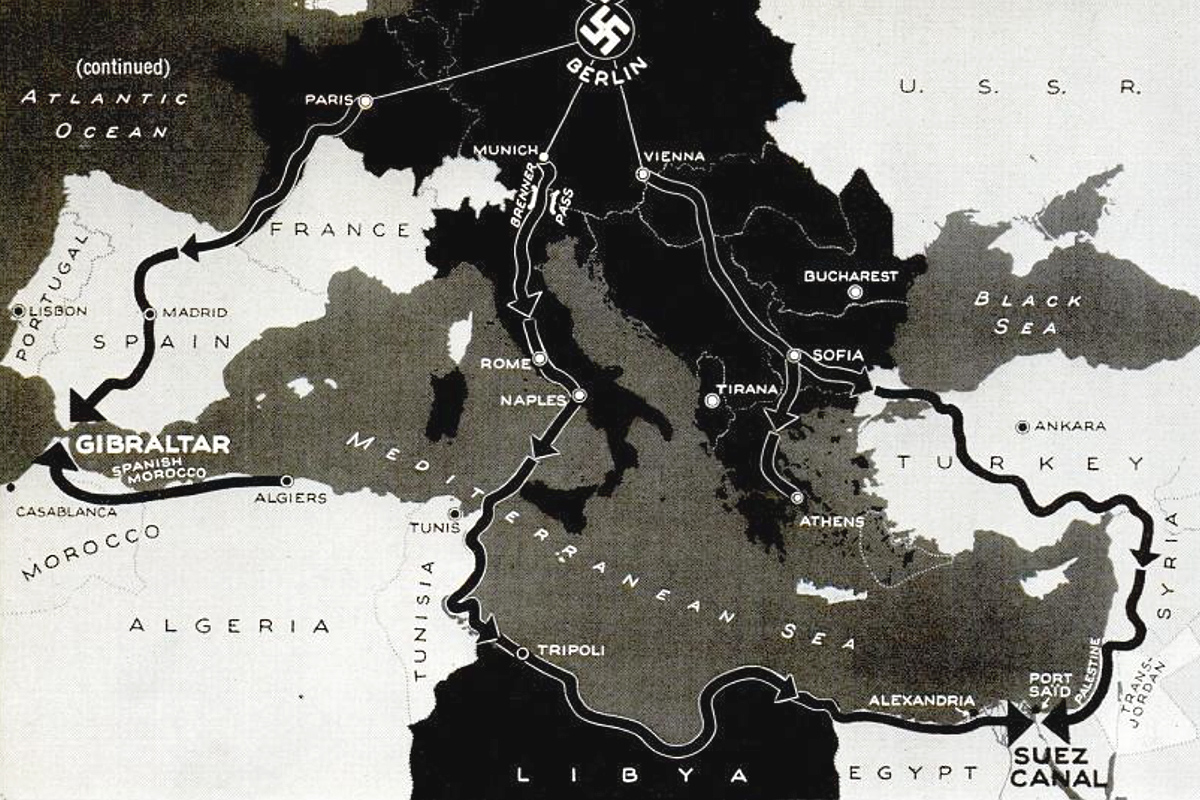 If Germany were to move on Gibraltar as well as the Suez Canal, it could trap Britain’s fleet in the Mediterranean, cut off its supply lines to India and protect Europe from a blockade by sea with the oil reserves of the Middle East and the granaries of North Africa in its possession.

This prospect alarmed the Americans, who feared German troops could eventually reach Dakar on the West African coast and from there menace the Western Hemisphere.

Secretary of the Navy Frank Knox warned, “Too few of us realize the size of the disaster to American hemispheric safety if Germany, already the conqueror of France, should establish herself in Dakar, a French colonial possession. From there, with her surface ships, submarines and long-range bombers, a victorious Germany could make of the Monroe Doctrine a scrap of paper.”

The Germans never made it to Dakar or anywhere close. One major obstacle to their Middle Eastern ambitions was Turkey. Germany’s ally during the First World War decided to stay neutral in the second.

President İsmet İnönü, Kemal Atatürk’s successor and a former army chief himself, had considered an alliance with the Soviet Union and the West to contain Nazi power before the war, but then the Soviets signed their nonaggression pact with Germany in 1939 and the Turks felt there was no point in allying with Britain and France alone.

The Nazis offered Turkey parts of Greece in exchange for joining the war on the Axis side, as well as buffer states in the Caucasus, but İnönü turned them down. His sympathies were with the Allies and the Germans recognized that an invasion would have needlessly made an enemy out of Turkey.

By December 1943, İnönü was already confident the Allies would prevail and met openly with Franklin Roosevelt and Winston Churchill in Cairo. He wasn’t prepared to join war yet but agreed to the construction of the Incirlik Air Base near Adana for possible Allied air operations in the region. The base would later play a role in the Cold War.

Turkey didn’t formally join the Allies until 1945, when the Nazis had been all but vanquished.

A German invasion by North Africa would have to cross the British fortress of Alexandria, where the Mediterranean Fleet was stationed. (It was originally headquartered in Malta, but moved to Egypt shortly before the outbreak of the war.)

Life described the port vividly in its April 28, 1941 issue:

There is an endless buzz and commotion among all the ships — signaling, painting, refitting, launches taking men ashore and officers visiting from ship to ship. The flag of every non-Axis nation with a merchant marine flaps in the sweltering Mediterranean breeze. And of course submarine nets guard every entrance.

Italian troops, operating out of Libya, had originally made some headway against the British but were pushed back in late 1940. Hitler sent Erwin Rommel and his Afrikakorps to help in February 1941. The Desert Fox was more successful than the Italians, pushing far into Egypt and putting a scare into the British. He was finally stopped by Bernard Montgomery at El Alamein, a small railway station some one hundred kilometers west of Alexandria.

Oilfields of Iran and Iraq

The great fear was that Germany would reach the oilfields of Iran and Iraq. Life reported in April 1941 that the former had produced some 81 million barrels of oil in 1931 and the latter 30 million barrels. “With that supply Hitler could fight on indefinitely,” it argued.

The Germans used propaganda to win the hearts and minds of the Arabs living under British and French colonial rule in Iraq, Palestine and Syria. Life credited this information war with the 1941 Iraqi coup that overthrew the pro-British monarchy in favor of a pro-German junta.

The British response was swift: Indian Army troops were landed at Basra while British and Arab Legion forces were sent in from Palestine and Transjordan. Within weeks, ‘Abd al-Ilah of Hejaz was restored as regent, who ruled until King Faisal II came of age in 1953.

Hitler regarded the Iranians as a fellow Aryan race and the Allies thought that Reza Shah might be sympathetic to Hitler. Britain and the Soviet Union jointly invaded Iran in September 1941 in order to keep it out of the war. The occupation, which lasted for three years, also enabled the United States to supply the Soviet Union under the Lend-Lease Program.

It’s hard to believe now but in the spring of 1941, when the Germans were on a roll and still at peace with the Soviets, even far-flung India, Britain’s most prized colonial possession, seemed at risk

Life argued in April of that year that a German invasion from the west might convince the Soviets to strike simultaneously from the north into Afghanistan and Iran.

The Nazis sympathized with the Afghans; some halfhearted attempts were made to persuade them to rise up against the British. But they had only scorn for the Hindus. Hitler praised British colonial rule and hoped to reach a peace with the United Kingdom that would preserve its empire in India. When it became clear the British were interested in no such deal, Hitler agreed to carve up the subcontinent with Japan in the Axis powers’ plans for world domination: Germany would control modern-day Afghanistan and Pakistan; Japan would take the rest.

Nothing, of course, came of such schemes, but Indians did see action against the Axis. By the end of the war, some 2.5 million of them had volunteered for the Indian Army. They fought the Japanese in Burma, Rommel in North Africa and helped defeat the Italians in 1944 and 45.

A few fought on the other side: some 3,000 — many prisoners of war — were recruited by the Germans into the so-called Legion Freies Indien (Free India Legion).