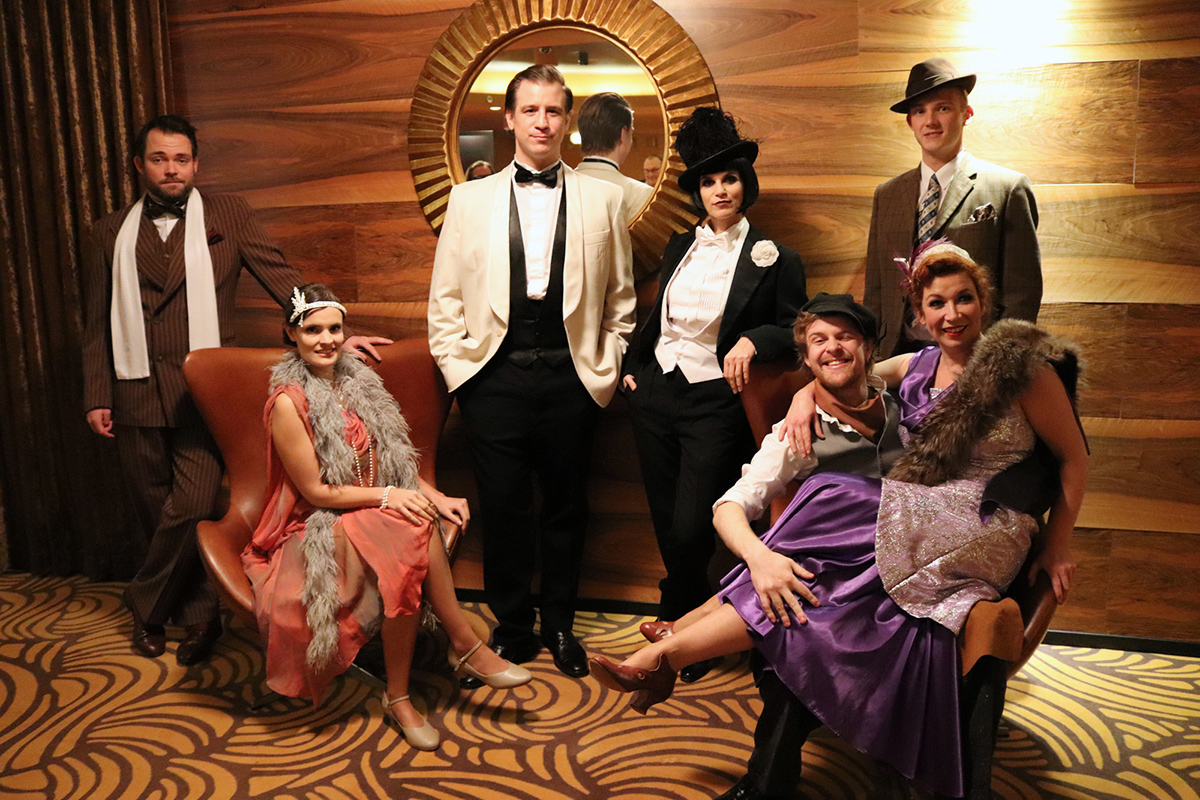 After more than three years of overwhelming success, The Great Gatsby, the immersive musical theater, is coming from London’s West End (where it is still running in the London Bridge area) to Belgium.

Starting this March, and running into May, shows will be held in Dutch, French and English in a secret location in the heart of Brussels.

Never Was was lucky enough to attend the press conference introducing the principal Dutch- and French-speaking cast. Because the Jazz Age is bread and butter to many dieselpunks, this piece will tell you more about this unique show.

According to Oliver, who starred in the British version as Jay Gatsby himself and now directs the Belgian shows, The Great Gatsby is something new entirely. Visitors won’t know what to expect, especially if they are used to traditional theater. This play is immersive in the true sense of the word as the audience can get up and move around in the four different areas of the performance building. They can dance, sing and interact with the characters. Almost as if you’re playing a real-time video game and experiencing real interaction rather than gameplay, the director joked.

One of the biggest challenges was to translate the script in different languages. The Dutch and French shows won’t be exactly the same as the English one, as they made changes to allow for local dialects and references. But with The Great Gatsby, no two shows are exactly the same anyway as a lot depends on the interaction with the audience and improvisation.

Allowances have also been made when it comes to F. Scott Fitzgerald’s novel of the same name. Whereas the books spans a whole summer, the play takes place during one night: a party thrown by Jay Gatsby. That said, they have tried to stay true to the books as much as possible.

Jazz Age as you never expected it

So how does this work?

Everyone who buys a ticket knows that the show will take place in the center of Brussels, in a location that can be easily reached by car and public transport. But they will not be given the address until one or two weeks beforehand. You can count on the play getting started as soon as you stand in front of the building, because it is that immersive.

To make the show as authentic as possible, modern technology, like phones, are not permitted. Even the necessary staff, such as those manning the bar and taking care of security, are part of the event. They’re even working on refurbishing original distillery pieces for the play and all drinks and food are historically accurate.

Introverts and extroverts alike can eat their heart out. If you are uncomfortable interacting, you can stay in the main area, where there’s always something going on. Or you can get up and explore the other rooms with different characters. There are plenty of parts with all members of the cast together, so everyone will be able to get the most out of it. But of course, there’s a lot of fun in participating.

You can choose to pay in dollars or euros (much like drinks coupons) designed for the event. While there is no mandatory twenties dress code, dressing to impress and in your period finery is definitely encouraged. (If you’re looking for inspiration, we recommend watching Miss Fisher’s Murder Mysteries on Netflix).

There are three different casts. For the Dutch and French shows, ten actors were cast in Belgium and the Netherlands. For the English show, the original British cast will come down to Belgium.

Tickets are going fast, and only 200 places are available per showing, so if you’re into musical theatre and Jazz Age, grab yours while you can!

Browse to www.gatsbybelgium.be to learn more.