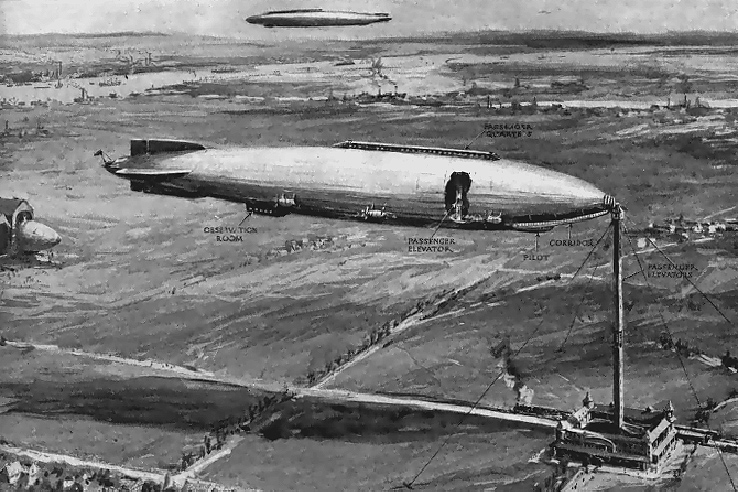 It was in the United States, however, that some of the most ambitious schemes were developed. The Vickers Company proposed to build an airship for transoceanic travel, 800 feet long and 100 feet in diameter, able to carry a hundred passenger in luxury.

The ironic image of an airship hovering over the skyline of New York City spoke to the imagination of an entire generation. According to David Szondy, airships “seemed to defy all logic as they floated on their moorings like impossible balloons.” While aeroplanes were still prang-prone string kites, “airships evolved into the true liners of the skies.”

They were the embodiment of gracious living. They advertised to all the world what technology was capable of. And they crossed mighty oceans with ease while planes were hopping puddles.

At least, until the Hindenburg went up like a cheap Chinese lantern at Lakehurst, New Jersey in 1937.

Before the tragic demise of the Hindenburg, everything seemed possible. Modern Mechanix called for the construction of an airship so gargantuan that it could carry a fleet of aeroplanes. The Empire State Building’s distinctive Art Deco spire was designed to serve as a mooring mast and depot for dirigibles.

Like the airship itself, though, this proved to be rather impractical and even dangerous due to the powerful updrafts caused by the size of the building. Luckily, we can still see the procedure in Sky Captain.