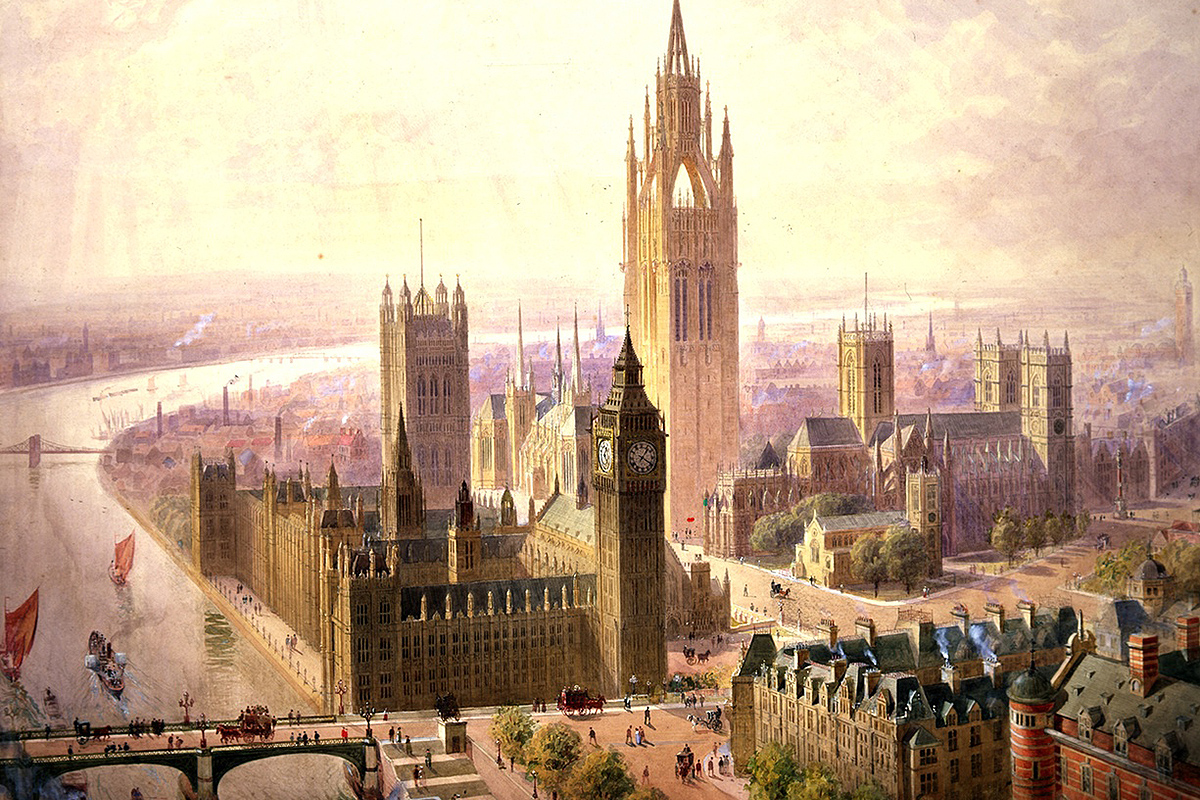 This proposed bridge across the Thames seems to take its inspiration from the Ponte Vecchio in Florence. It would have replaced what is now the Hungerford Bridge, also known as the Charing Cross Bridge after the Charing Cross railway station situated on its north end.

One of the architects was Thomas Edward Collcutt, who also designed such London landmarks as the Palace Theater and Savoy Hotel. The other architect is given as “S. Hamp”, but I’m not sure who that is. If you do, please let us know in the comments!

In the early nineteenth century, Sir Frederick William Trench, a former soldier and lawmaker who proposed the Thames Embankment, suggested building a ziggurat (stepped pyramid) at the top of Whitehall to commemorate Britain’s victories in the Battle of the Nile and the Battle of Trafalgar.

The pyramid would have been taller than St Paul’s Cathedral and consisted of 22 steps: one for each of the years Britain fought Revolutionary and Napoleonic France.

A statue of Horatio Nelson, the hero of Trafalgar, was built instead.

In 2018, The Guardian published a rendering by the CG Orange agency of what such a pyramid might look like today.

Joseph Michael Gandy failed as an architect and didn’t have a lot of success as a painter either. These 1824 proposals for an Imperial Palace in Hyde Park only ever existed in his imagination.

Before it was relocated to Penge Peak next to Sydenham Hill, there were various proposals for what to do with the Crystal Palace, built for the Great Exhibition of 1851. Charles Burton wanted to convert it into a tower 300 meters (1,000 feet) high, which would have made it the tallest building in the world at the time — and possibly the tallest in London today. (The Shard is about the same height.)

On Verticality has more.

Joseph Paxton, the designer of Crystal Palace, followed up with an even more ambitious proposal in 1855: a ten-mile covered loop surrounding central and west London, integrating a glass-roofed street, railways, shops and houses. Three river crossings would have continued the arcade, creating inhabited bridges.

Prince Albert, Queen Victoria’s husband, favored the scheme. So did many parliamentarians. But the Great Stink of 1858 intervened, diverting all infrastructure funds to the construction of a sewer.

In the second half of the 1800s, increased commercial development in the East End led to demands for a new river crossing downstream of London Bridge. A traditional fixed bridge at street level would have cut off access to the port facilities in the Pool of London, hence the need for an innovative solution.

More than fifty designs were submitted. F.J. Palmer proposed to lock ships in loops. Frederic Barnett suggested something similar: a sluice-like system with two bridges. Civil engineer Joseph Bazalgette, who designed London’s sewer system in the wake of the Great Stink, argued for simply building a bridge tall enough to allow ships to pass underneath. Horace Jones’ concept of a bascule bridge, or drawbridge, consisting of two towers prevailed.

During the Second World War, W.F.C. Holden proposed encasing Tower Bridge in glass to protect it from German bombs. Although I’m not sure how glass would have helped?

Several schemes were considered in the late-ninenteenth century to expand Westminster Abbey. It was felt the church had become too crowded with monuments and more space was needed.

John Pollard Seddon and Edward Beckitt Lamb found the solution in adding a huge Memorial Tower to the abbey that would have been the tallest in the United Kingdom at the time.

Also known Watkin’s Folley, this never-completed tower in Wembley Park was the brainchild of railway magnate Edward Watkin, who also tried to build the first Channel tunnel. His idea was to construct an amusement park in Wembley to draw Londoners out of the city — on his trains.

Watkin first asked Gustave Eiffel to create a replicate of his famous Paris tower, but the Frenchman refused. A competition was then held in 1890. 68 designs were submitted. The winning entry consisted of an eight-legged metal tower 45 meters (150 feet) taller than Eiffel’s. It was to have two observation decks, Turkish baths and a ninety-bedroom hotel. The top floors would have housed a sanatorium and an astronomical observatory. The eight legs were later scaled back to four to cut costs.

Foundations were laid in 1892 and construction started in June 1893. Wembley Park opened in May 1894, although the tower was still incomplete. Watkin fell ill and it was discovered the foundations were unstable. After Watkin’s death in 1901, the half-built tower was torn down and Wembley Stadium built in its stead.

All 68 submissions can be found here. Artist Ed Thomasten has adapted a turn-of-the-century postcard of Wembley Park, replacing the planned Watkin’s Tower with the design that placed second in the competition.

In the 1890s, eight architects were invited to submit proposals for a scheme to unify the building of the South Kensington Museum, which had been expanded haphazardly since the 1851 Great Exhibition, when it was initially known as the Museum of Manufactures.

John Belcher’s Edwardian Baroque proposal, seen here, was favored by the judges, but the museum worried it would be too expensive. The first prize went to Aston Webb instead. His design was inaugurated in 1899 by Queen Victoria, who rechristened the institution the Victoria and Albert Museum.

In Charles Holden’s original plan, Senate House, the administrative center of the University of London, which housed the Ministry of Information during the Second World War, would have been the centerpiece of a sprawling Art Deco complex. Lack of funds, and the onset of war, prevented its completion.

High Treason (1929) was one of the very first sound movies released in the United Kingdom, although most people saw the silent version at the time.

Set in a future 1940 (changed to 1950 in later releases), the plot involves a conflict between the United States of Europe and the American-led Atlantic States. London, which has several vast new buildings and flying machines in the air, is the headquarters of the World League of Peace. Both the story and look of the film were influenced by Fritz Lang’s Metropolis, which was released two years earlier.

In 1931, Charles Glover proposed to improve aerial access to London by building an elevated airport above the railway sidings of King’s Cross. Its pinwheel arrangement of concrete runways, built on top of new buildings, would have allowed planes to take off in different directions across the city.

Airport on the Thames

Another proposal for an airport in central London was reported by Popular Science in March 1934: a “monster landing field” on the River Thames “as a means of providing the city with an airport close to its business center.” It would have been tall enough to accommodate passing ships and suitable for single-propeller airplanes.

Orange adapted the original design for The Guardian with a new ramped runway, in order to give planes more time to take off, and a riverside check-in lounge in addition to the storage (of planes and fuel) that was planned for underneath the runway and elevators in the support pillars.

This 1935 Greys Cigarettes box showed what Piccadilly Circus might look in the year 2500.

The entire city has been covered by a roof of non-conductive mica glass. Rubber roadways are avenued into 50, 100, 150 and 200 miles per hour. Cars are powered by atomic energy. Sidewalks have been converted into moving pathways. Monorails swoosh overhead. There are ads for wireless television and solar energy, and a monument to the heroes of the Martian War.

Two things Greys didn’t predict were lung cancer and their own demise.

The last few years have thankfully seen a reversal of the cars-first philosophy of the mid-twentieth century. Charles Bressey, the chief engineer for roads in the Ministry of Transport from 1921 to 1938, preceded the trend with these 1937 sketches, going so far as to call for a three-story parking garage in Trafalgar Square!

There were several proposals for a heliport in central London. Kenneth Lindy and Winton Lewis suggested building one in Liverpool Street in 1944. The architectural firm Aslan and Freeman drew up plans for a heliport over Charing Cross railway station in 1951. It would have been some 30 meters (100 feet) above street level.

Misha Black, best known for designing Westminster’s street signs, proposed a vast modernist complex on the South Bank of London to house the 1951 Festival of Britain, which celebrated both the centennial of the 1851 Great Exhibition and Britain’s postwar recovery. The building would have been crowned by a disc-shaped observation platform towering more 450 meters (1,500 feet) over London.

Instead, a temporary Dome of Discovery was erected, which inspired the construction of the Millennium Dome half a century later.

NeoMam Studios adapted Black’s design for a campaign for the online lenders at QuickQuid.

In the years after the Second World War, there was a desperate need for new homes. Architect Sergei Kadleigh called for the construction of three massive tower blocks over the railway lines approaching Paddington Station. The complex would have housed some 8,000 people and included its own church and school.

Another radical postwar reconstruction plan was for the demolition of old Soho and pouring the entire neighborhood into concrete. Geoffrey Jellico, Ove Arup and Edward Mills argued in 1954 for tearing down the area’s old buildings and replacing them with 24-story towers built on a concrete platform with landscaped gardens and glass-bottomed canals that followed the path of the streets.

Another part of historic London slated for demolition: Piccadilly Circus. William Holford proposed tearing down three-quarters of the buildings in the area in the early 1960s to introduce more space for roads and the sort of monotonous high-rise that dominated the skylines of Soviet-controlled Eastern Europe.

In 1963, the Glass Age Development Committee, which had been established in 1937 to promote the use of glass in buildings, proposed replacing Vauxhall Bridge with a “Crystal Span”: a 370 meter-long, seven-story glass structure across the Thames. Traffic would flow through the lowest level. Shops, galleries, a skating rink and hotel would be housed in the top floors. The roof would consist of public gardens and an open-air theater.

London County Council was interested, but it balked at the £7 million price tag (£148 million in today’s money).

In 1964, Leslie Martin, who built the Royal Festival Hall on the Victoria Embankment in 1951, was hired to propose a masterplan for the reconstruction of the government quarter in central London. His vision involved tearing down all the monumental buildings between Westminster Palace and Downing Street to make way for a Le Corbusier-style Whitehall.

Ron Herron designed the Walking City in the mid-1960s to survive the apocalypse. Insect-like in shape, these consisted of multistory buildings mounted on giant, telescopic steel legs. Onward, the blog of On Stride Financial, published a rendering of what the Walking City might look like in today’s London.

In 1967, the Conservative Party, then in opposition, called for a monorail system in central London to relieve congestion. Four large loops would have been built above the streets of the capital, replacing its famous red buses.

In his concept art for the 2015 video game The Order: 1886, Joey Studz shows a London overshadowed by Victorian-era skyscrapers not unlike the Imperial Monumental Halls and Tower by Edward Buckton Lamb and John Seddon we saw earlier.

Ian Mansfield and the Londonist have more.