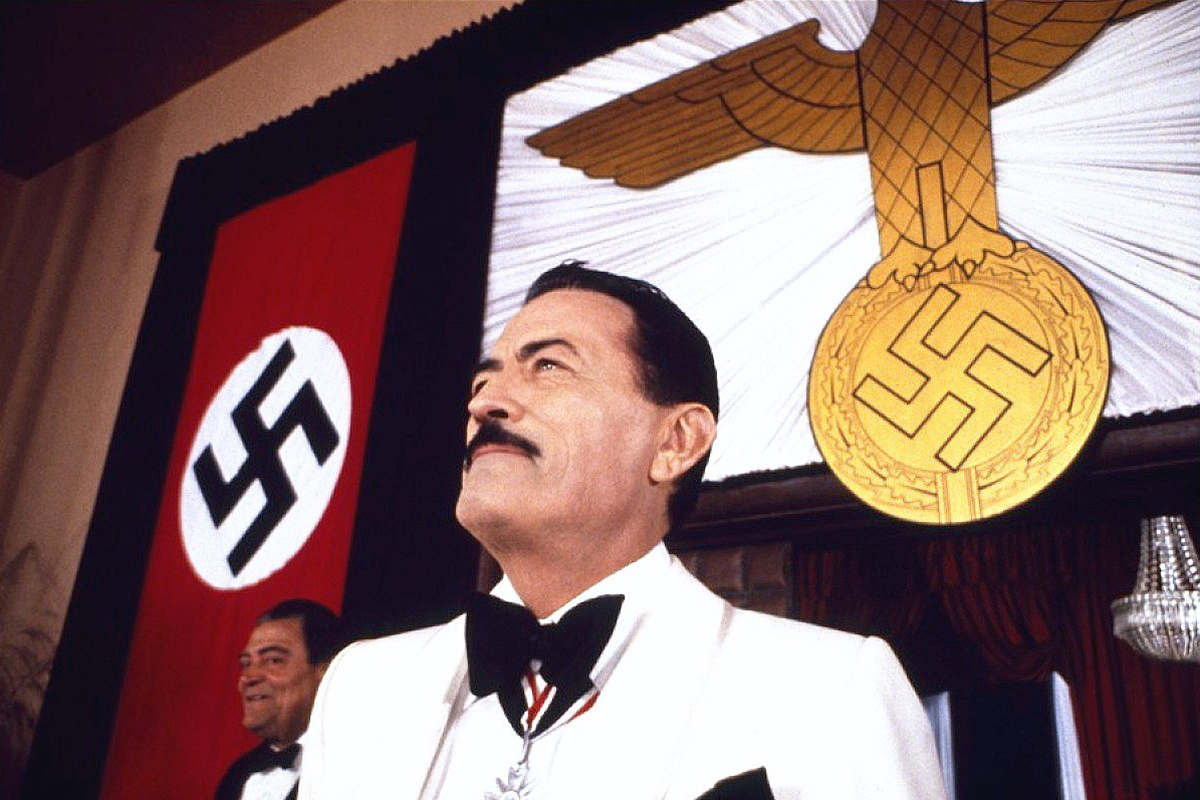 Frederick Forsyth’s 1972 novel The Odessa File (and the 1974 film adaptation, starring Jon Voight; our review here) popularized the genre. The story involves the famed Holocaust survivor and Nazi hunter Simon Wiesenthal and a plot by SS veterans and the Egyptian government to destroy the State of Israel.

In Ira Levin’s The Boys from Brazil (1976), Dr. Josef Mengele and other Nazis have fled to Brazil, but they haven’t given up. Their plan is to clone Hitler and make another attempt at world domination. Gregory Peck stars as Mengele in the 1978 film adaptation.

Mengele, who notoriously performed deadly human experiments on concentration camp inmates, really lived out his final years in Brazil, where he eluded Israeli and West German efforts to find him. He had earlier lived in Argentina and Paraguay.

Argentina was also where Adolf Eichmann, one of the architects of the Holocaust, fled to in 1950, using false papers furnished by the Austrian bishop Alois Hudal, who helped more Nazis escape. Eichmann was captured by Israeli spies in 1960 and put on trial. The events are dramatized in the 2018 film Operation Finale, starring Ben Kingsley.

Soviet agents discovered the burned remains of Hitler and his wife, Eva Braun, four days after the couple had committed suicide. Yet the Soviet Union publicly maintained it wasn’t sure if Hitler had died.

Joseph Stalin suggested in July 1945 that the former German leader was probably living “in Spain or Argentina”. For years, his government would claim that Hitler was alive and being shielded by the West. The American CIA and FBI both pursued Hitler sightings, but never found evidence that the Führer had survived.

In the 2011 book Grey Wolf: The Escape of Adolf Hitler, Simon Dunstan and Gerrard Williams allege that Hitler, Braun and Bormann fled to Argentina, where they were sheltered by future president Juan Perón. Hitler supposedly lived out his final years in a Bavarian-style mansion on Lake Nahuel Huapi in northern Patagonia. Historians don’t take this story seriously. A recent examination of teeth held in Russian archives proved definitively that Hitler died in April 1945.

Of course, fiction can bring him back. We’ve already seen one attempt to clone him in The Boys from Brazil. The episode “Anschluss ’77” of The New Adventures of Wonder Woman (1977) has a similar plot.

In the comic book Superman: At Earth’s End (1995), written by Tom Veitch with art by Frank Gomez, an elderly Superman must battle not one but two Hitler clones. In Sonia Levitin’s The Goodness Gene (2005), a young boy finds out that he is a Hitler clone.

The disappearance of prominent Nazis, and the fact that so many went south, convinced some conspiracy theorists they planned to bring back the Reich — if not from Latin America, then perhaps from the South Pole. (Also see Nazis in Antarctica.)

Iron Sky: The Coming Race (2019, our review here) looks to be taking this route with a secret Nazi base under the surface of Antarctica where Hitler is still alive.

Earlier examples include the movie The Quiller Memorandum (1966), which centers on a neo-Nazi plot in Germany itself (the Nazi references were omitted from the version released in West Germany at the time), and Robert Ludlum’s The Holcroft Covenant (1978), made into a film with Michael Caine in 1985, in which Aryan youth were smuggled out of Germany toward the end of the war to be raised in secret for the resurrection of the Nazi empire.

In Amazon’s Hunters (2020, our review here), starring Al Pacino, Nazis occupy high positions of power in the United States and have had a hand in every tragedy of postwar America, from the assassination of Robert Kennedy to the 1977 New York blackout. Hitler and Eva Braun are still alive and leading an attempt to bring about a Fourth Reich from Argentina.