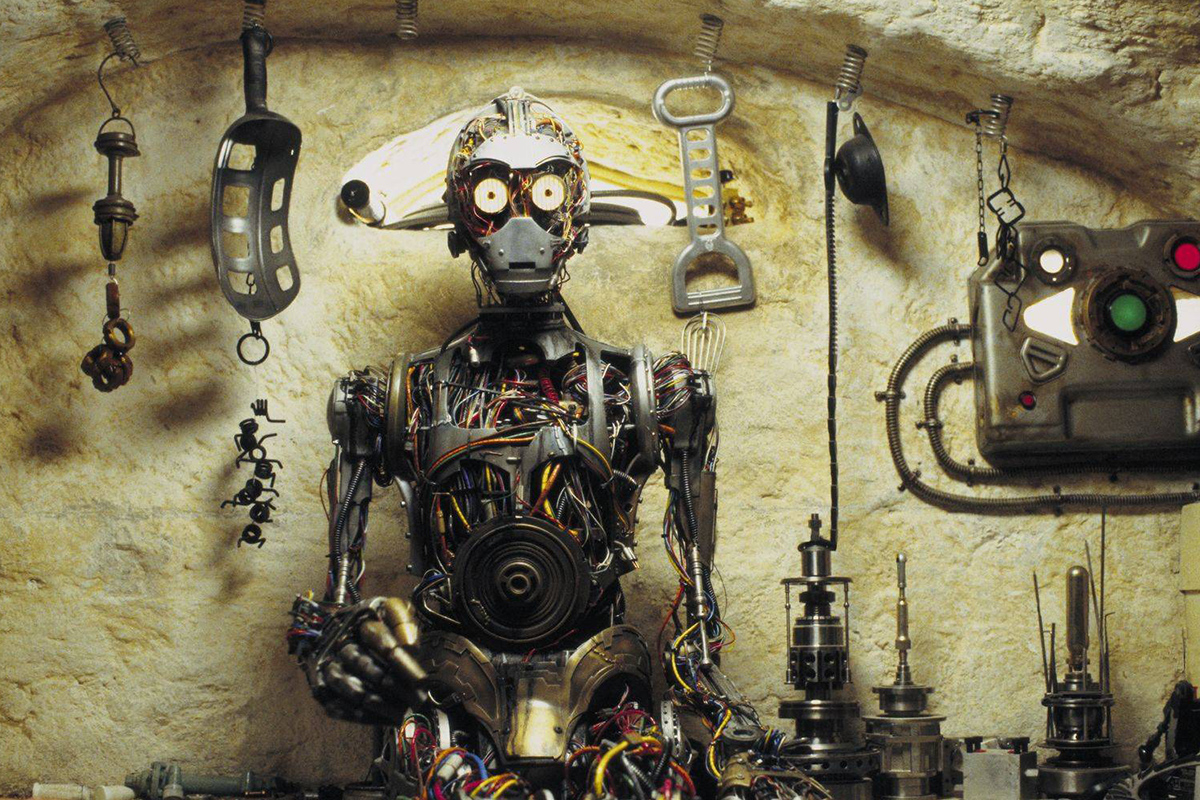 Star Wars is the quintessential space opera with fans around the world. Rather than write the nth article about what makes Star Wars such a phenomenon, I am going to talk about how the movies have had an impact on mostly dieselpunk.

Stick around til the end, because your intrepid reporter managed to ask Anthony Daniels, the actor who has portrayed C-3P0 since the beginning of the franchise forty years ago, some questions while he was a guest at Comic Con Brussels.

These are by no means dieselpunk films, with the exception of the two Ewok movies from the 1980s, which are ultralight family-friendly movies in the style of Mad Max and The Blood of Heroes. Pretty much the same kind of setting, none of the gore or brutality and a prime example of post-apocalyptic dystopian dieselpunk (probably why they’re not mentioned anymore now, they have a hard time fitting into the rest of the universe).

And yet, with only two dieselpunk movies in a very long list, Star Wars has had a surprisingly big impact on dieselpunk.

Although, considering all the dieselpunk elements there are in the movies, including the cartoons, it is perhaps not that surprising that ‘punks are drawn to the franchise like moths to a flame.

From the steampunk-looking, half-built C-3PO in The Phantom Menace to the post-apocalyptic feel of Tatooine and Jakku to the atomicpunk look of the planet-wide city Coruscant.

From the militaristic Empire and First Order, whose uniforms and hierarchy are strongly reminiscent of Nazi Germany, to the dieselpunky underdogs of the Rebellion.

SS soldiers rally in Nuremberg, Germany in the late 1930s

It’s the characters, the droids, the speeders, the dirt and grit and the story which inspire fans of the ‘punk genres and draw them in.

The Star Wars galaxy, while far, far away from our own, is populated by our own visions of the future, including those from the past.

In chronological order, not in order of release:

Seeing Solo hasn’t been released yet, I haven’t added it to the list, as I am unsure where exactly it fits. I’m guessing around the same time as Rebels, but at this point it’s guesswork.

And now, as promised, quick questions with Anthony Daniels, who has been portraying C-3P0 since the beginning.

R2D2 is quite infamous for getting Treepio in all sorts of trouble. But what has been the nicest thing he’s ever done for C-3P0?

Absolutely. The nicest thing is that he has been Treepio’s friend for many, many years. And like all friends, they tease each other. They have moments where they don’t get on. But then they get on even better the next time.

C-3P0 is an iconic part of not just the Star Wars universe, but sci-fi and robotics full stop. What makes you most proud of him being such a phenomenon?

Because one of the earliest examples of human cyborg interaction. And he has survived so much that he must have been made very well made from the beginning. He has become a little more quirky since the beginning. Like an old automobile he gets idiosyncrasies that you get used to. But he particularly likes the fact that humans relate to him, even though they don’t always listen to what he says.

If all of this isn’t enough for you, currently Star Wars Identities is at its very last European stop in Palais 2 of Brussels Expo, Belgium until September 2.

The exhibition not only shows you a wide array of movie props, concept art and costumes, but also immerses the visitor into the Star Wars universe via unique RFDI-powered bracelets allowing you to create your own Star Wars character.

Well worth the visit to see these items in real life. They’ve done a marvelous job both presenting all the items and integrating the interactive technology in one fluent and comprehensive expo.

Make sure to also pick up the exhibition guide, because it’s a beautiful book that would not look amiss on the shelf of anyone into the franchise.