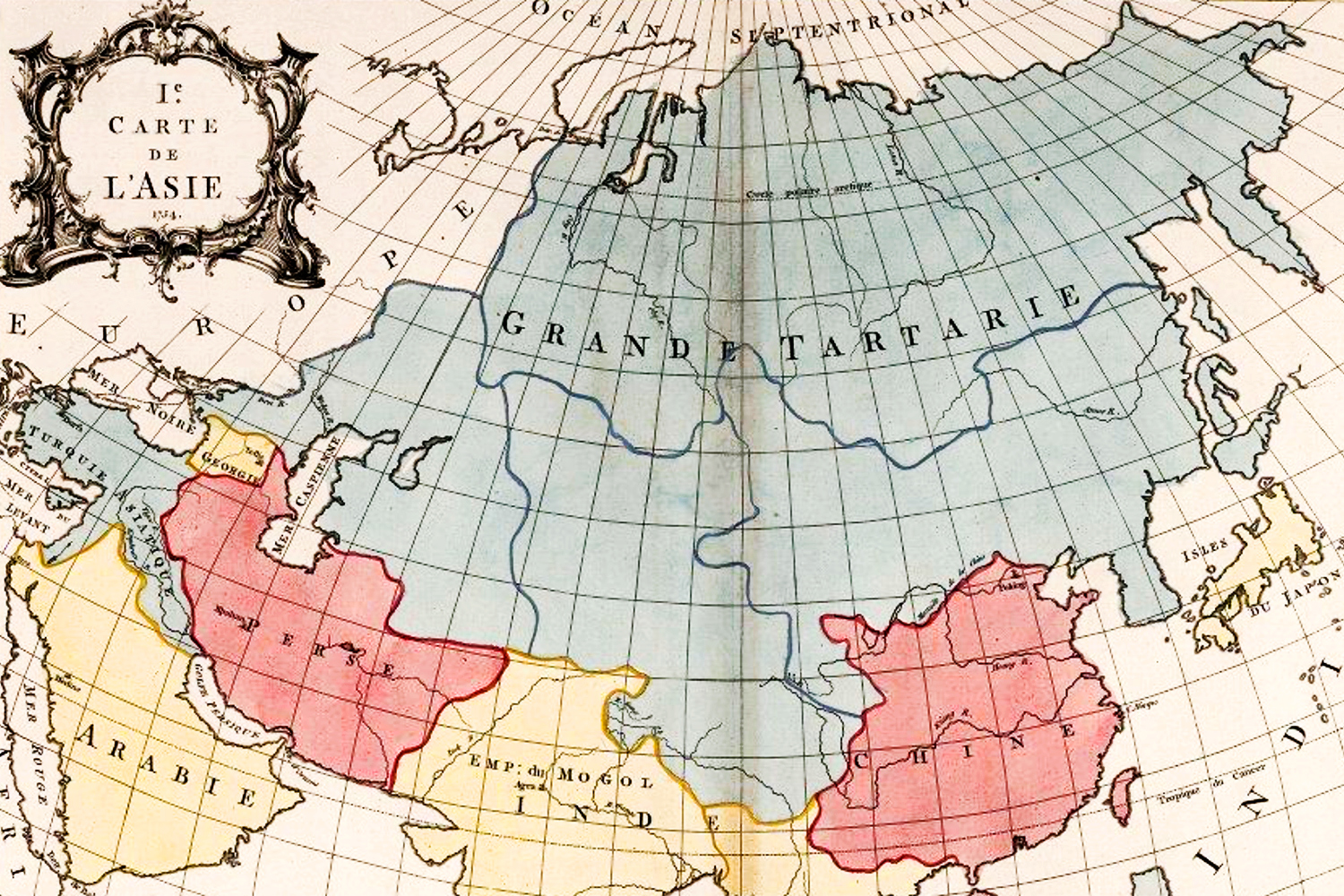 Opinions are divided about the empire’s demise. Some believe a biblical-sized mud flood decimated Tartaria, which also explains why so many old buildings have what we now call semi-basements. Adherent of this theory suspect monuments like Saint Basil’s Cathedral in Moscow’s Red Square continue tens or even hundreds of meters underground.

Others suspect World War II was really a war of all against Tartaria, and the destruction of old Berlin, Dresden, Warsaw and other cities in Central and Eastern Europe was a deliberate effort to wipe away the traces of a rival civilization.

Whatever the catalyst, after this “great reset” history was rewritten by the victors and the surviving Tartarian buildings were recast as the creations of contemporary architects. What had been Tartaria’s moving capital was implausibly reimagined as “world’s fairs”. How else to explain that, every few years during the late-nineteenth and early-twentieth centuries, palatial complexes emerged all over the Northern Hemisphere? For entertainment? And then they would be demolished after the event was over? That makes no sense!

The fairgrounds were not the only beautiful buildings razed to the ground. The original Penn Station, bulldozed in 1963-68 to make way for the ghastly Madison Square Garden, is the most infamous American example. But it is hardly the only one.

The Waldorf-Astoria, the grandest hotel in the world, was sold and torn down in 1929, because New York high society had moved north, toward the Upper East Side. The City Hall Post Office and Courthouse of New York, built on Broadway in the Second Empire style between 1869 and 1880, was demolished in 1939 to expand City Hall Park. The Chicago Federal Building boasted a dome larger than the United States Capitol. It was razed in 1965 and replaced by Ludwig Mies van der Rohe’s Kluczynski Federal Building.

Built in stages between 1897 and 1908, the headquarters of the Singer Manufacturing Company, now Singer Corporation, in New York was the tallest skyscraper of its time. Incorporating Beaux-Arts and Second Empire elements, it was widely considered a Manhattan landmark, yet it would not receive official landmark status from the New York City Landmarks Preservation Commission, created amid the outcry over Penn Station’s destruction, to prevent its demolition in 1967-69. The site now hosts One Liberty Plaza, a black glass-and-steel box.

The Saltair was a resort on the Great Salt Lake of Utah that burned down in a fire in 1925. The former National Surgical Institute of Indianapolis, Indiana became the Imperial Hotel around the turn of the last century. Its domes and turrets were removed in the 1920s, when it became the Hotel Roosevelt. It was razed between 1945 and 1949 to make way for a parking lot. (Such incredible reasons for demolition are another red herring to Tartaria’s believers.)

Prince Grigore Sturdza’s palace in central Bucharest was for a while used by Romania’s Ministry of Foreign Affairs before the country’s postwar communist government tore it down in 1947. The Palácio Monroe was originally constructed as the Brazilian pavilion to the 1904 St Louis World’s Fair, rebuilt in Rio de Janeiro in 1906, where it served as the seat of the Brazilian Congress and later Senate between 1914 and 1960, before being marked for demolition in 1975.

London’s sprawling Imperial Institute, now the Commonwealth Education Trust, was almost entirely demolished in the 1950s and 60s to allow the next-door Imperial College to grow. Only the Queen’s Tower is still standing. The Old City Hall of Winnipeg, the capital of Manitoba, Canada, was destroyed in 1962.

Denver’s Mining Exchange was demolished in 1963 to make way for a Brutalist skyscraper. The Old Post Office of Pittsburgh, Pennsylvania was razed in 1966 to make way for another parking lot. The Second Empire-style Federal Hotel and Coffee Palace of Melbourne, Australia was lost in 1973.

Destruction was even more rampant in Russia. The Bolsheviks infamously blew up Moscow’s Cathedral of Christ the Savior in the 1930s to make space for the never-built Palace of the Soviets. (See Unbuilt Moscow) Modeled on the Hagia Sophia in Istanbul, it had been one of the largest Orthodox churches in the world. It was rebuilt after the collapse of the Soviet Union.

Hundreds of cathedrals, churches and mosques were less fortunate; they are lost forever. It isn’t hard to imagine there must have been something more sinister at play than bad taste, and of course there was: an attempt to stamp out religion.

Unless that’s the cover story and these were never cathedrals and churches to begin with, but rather the palaces of Tartaria?

One street up from the Cathedral of Christ the Savior, the Church of the Praises of the Theotokos in Bashmaki was also demolished for the Palace of the Soviets. The Church of Saint Paraskeva was destroyed in 1928. The headquarters of the Council of Labor and Defense was built in its place, which has housed the Russian State Duma since 1994. The Church of Saint Basil of Caesarea in Tverskaya-Yamskaya was torn down in 1935, the Church of the Assumption of the Holy Virgin on Pokrovka Street the following year — supposedly to expand the sidewalk. The Alexander Nevsky Cathedral was leveled in 1952.

In Saint Petersburg, the Cathedral of the Presentation of the Holy Virgin of the Semenovsky Regiment was destroyed in 1933; the Saint Miron Church a year later. The Saints Boris and Gleb Church was converted into a warehouse in 1934 and finally torn down in 1975. The Coastal Monastery of Saint Sergius was used as a labor camp after the Russian Revolution. Its cathedral was destroyed in the 1960s.

Lesser cities weren’t spared. Nizhny Novgorod lost its Saint George Church on the Volga Embankment in 1932 to a hotel. The Holy Trinity Cathedral of Tomsk was demolished in 1934 to make way for a square. The Church of the Transfiguration of the Lord in Bryansk was torn down between 1933 and 1935. The Cathedral of the Nativity of the Theotokos, or Blessed Virgin Mary, in Krasnoyarsk was lost in 1936.

Local authorities in Vyatka, now Kirov, tried to save the Alexander Nevsky Cathedral by proposing to turn it into a theater or other public space, but they were overruled. The cathedral was destroyed in 1937. The city’s smaller Holy Trinity Cathedral was demolished as well.

In 1939, the construction of the Uglich Dam flooded the old town of Kalyazin, north of Moscow, including its Saint Nicholas Church. Only the belltower remained above water, which is now a tourist attraction.

The original Transfiguration Cathedral of Odessa was destroyed in 1936, but it was rebuilt around the turn of the millennium. The Christ the Savior Cathedral in Borki, near Kharkiv, was destroyed in 1943. The Church of Saint Mary of the Perpetual Assistance of Ternopil, Ukraine was demolished in 1954 to make way for a shopping mall. Saint Mary’s Church in Grodno, Belarus was turned into a warehouse during World War II and demolished in 1961.

Secular buildings survived the demolition craze, and indeed some were (officially) built in Soviet times.

The Palace of Farmers in Kazan was erected in the over-the-top neoclassical style favored by Joseph Stalin. It now houses the Ministry of Agriculture and Food of the Republic of Tatarstan. Next to it are three improbably elaborate Beaux-Arts “apartment buildings”.

The 500-room Tampa Bay Hotel, now a museum, was allegedly built by railroad magnate Henry B. Plant in the late 1800s, when the New York Waldorf, one of the largest hotels in the world, had just 450 rooms. The banks and trading houses of the Shanghai Bund were built by Europeans in the early twentieth century, who enjoyed legal and trading rights there under unequal treaties imposed on China by force. Edwin Lutyens and Herbert Baker built the government quarter of New Delhi in a mix of European and Mughal styles.

Another odd sight the theory of Tartaria explains is that of sumptuous public buildings seemingly appearing out of nowhere in the wilderness. Lutyens’ Delhi is one example. The American West has more.

As the United States expanded westward, and the Frontier was tamed, ornamental city halls and state capitols were often the first buildings that appeared in the middle of planned future cities. The truth, according to believers, is that these palaces predate modern America and were the far-flung outposts of the Tartarian Empire.

Jump deeper down the rabbit hole at /Tartaria or /TartarianArchitecture on Reddit.