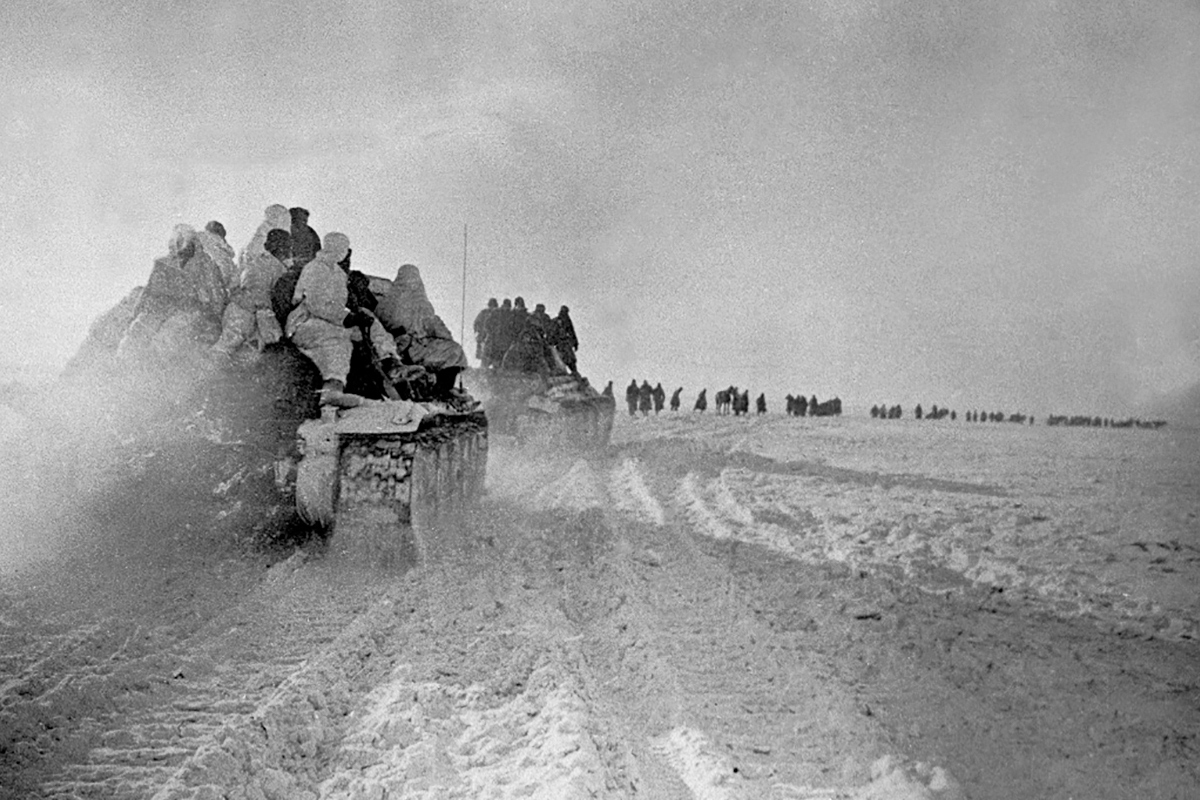 In the spring of 1941, Georgy Zhukov wasn’t yet the national hero that he would become throughout his service in the Great Patriotic War, but his position as deputy defense minister gave him a certain level of clout within the Soviet hierarchy and as such his proposed strategy was drafted on the May 15, 1941 with the hope of catching Stalin’s eye.

Zhukov argued in his plan that war with Germany was imminent and as such the Red Army should not sit and wait to be victims. Instead, they should strike before German preparations were complete to “preempt the enemy development, and to attack the German Army when it is in the process of deployment.”

The plan was to destroy the German forces massing in Poland and East Prussia (modern-day Kaliningrad), which he estimated to be around 100 divisions, in a three-pronged attack from the south, north and northwest. If all went smoothly, then Warsaw and Kraków were to have been liberated in four weeks with the Wehrmacht destroyed in the process. Subsequent operations would see the Red Army take the rest of Poland and East Prussia. If this could be accomplished, and Germany’s allies held at bay in the meantime, then Berlin and Prague would have been less than 200 miles away with nothing standing between the Red Army and final victory. Germany had defeated France in six weeks. The Soviet Union would have defeated Hitler in a month.

At full mobilization, the Red Army would outnumber the Germans in manpower, tanks and aircraft, although time was running out both to complete this build-up and to attack before the Germans could launch their own invasion. Red Army expert Colonel David Glantz estimates that it would have taken until the middle of June for the forces necessary for Zhukov’s plan to be assembled and even then the Red Army would still have had its issues with a lack of trucks, radios and spare parts for vehicles, even though it’s likely the problems they had with ammunition and fuel would have been mitigated somewhat in preparation for the offensive.

Zhukov would have been aware of these shortcomings and it’s likely he would have admitted that the plan was wildly optimistic. Realistically, he may have just been trying to bring Stalin’s attention to the approaching danger of the German invasion. Either way, there’s no record that Stalin ever did review Zhukov’s proposal at the time, and despite the Soviet officer’s clout it’s unlikely that it would have convinced Stalin that war with the Germans could not be delayed, let alone that the best plan of action was to start the war themselves.

Stalin was notoriously wary of gambles, although history has shown that he was willing to take them when he felt as if there was no other option. It’s unlikely he would have signed off on Zhukov’s plan had he seen it, but for the sake of the scenario let’s assume Zhukov is able to convince him that the dangers of not taking this chance are far worse than attempting to defeat Germany in one fell swoop.

By the middle of June, a week before Operation Barbarossa was about to begin, the codeword “Groza” (Thunderstorm) would have been sent out to Soviet frontline commanders. This was the codeword for Soviet forces to move to full combat readiness. In our time, it had been read out in haste in the early hours of June 22, when the German invasion had already begun, but in this scenario it would have been the final confirmation that the Soviet attack was about to begin. Shortly after, 35,000 Soviet artillery pieces would have announced to the world that the Soviet Union had entered the Second World War, and on its own terms.

What would have followed depends heavily on the factor that made the opening weeks of Operation Barbarossa such a success: strategic and tactical surprise. Zhukov’s plan would have arguably relied even more heavily on surprise if it were to succeed, something Zhukov planned to achieve by feigning the build-up on the border as a large Red Army exercise. To what extent the Germans would have believed this is debatable. In the Second World War, the Soviets had made great use of “maskirova” (disguise), a mix of deception and mimicry to make their German enemies confused or deluded. In 1941, the Red Army had not honed these techniques to a fine art, but they did have some experience in tricking enemies into disbelief, particularly in the pre-war border conflicts against the Japanese.

It’s hard not to find a certain ironic satisfaction in imagining the scene that would have unfolded had the Soviets taken the Germans by surprise. The Luftwaffe, not yet fully assembled, being mowed down on the runways while German soldiers rudely awoken struggle to get to their guns amid a hail of fire before seeing their ammunition and fuel depots going up in flames amid Soviet airpower and artillery. Zhukov’s plan would have seen two corps of airborne troops drop behind the German lines to sow further chaos before the Red Army ploughed through the shattered defenders.

The Germans, taken by surprise, lacking air superiority and fighting a war they weren’t prepared for, would be forced to try to hold off the Red Army advance through irreplaceable losses in men and material. Zhukov had incorrectly judged the German dispositions and contrary to Soviet plans their advance would have rushed headlong into the massed ranks of the largest German forces, Army Group Center. What would have ensued would have been a brutal meatgrinder with the best German and Soviet forces locked in a desperate war of attrition. The Germans would be forced to fall back due to lack of preparedness and disruption behind their lines, but the momentum of the Red Army’s advance would have begun to run out of steam due to heavy losses and their own stretched supply lines.

In four weeks’ time, after the dust had settled, the result likely would have been in a bloody stalemate with the Germans having managed to hold the Red Army probably somewhat east of Warsaw. Zhukov would have failed to destroy the Wehrmacht, but he could have taken some satisfaction that he had saved his country from invasion. The Red Army, unlike the Germans, would have been able to replace their losses and it would not be long before the Soviet march west could continue.

However, we must also consider the possibility that the Soviets failed to achieve surprise, which would have entailed a far different, catastrophic outcome. The Germans had been monitoring the Red Army on the border for several months, the Luftwaffe‘s aircraft able to fly through Soviet territory due to Stalin’s fear that any Soviet response might be seen as a “provocation”. Had the Soviets been preparing to attack the Germans, it’s likely the Luftwaffe would have to be more surreptitious, but all the same it’s possible they would have been able to observe the Red Army amassing on the frontier and that the Wehrmacht would have been able to prepare accordingly.

Operation Bertha was the name of the German contingency plan for a Soviet attack during the preparations for Barbarossa. Details as to what the plan would have actually entailed remain buried in the German archives, but from what can be ascertained it would spell a disaster for the Red Army. The Germans would have prepared a defense in depth on the San and Narew Rivers, absorbing the Soviet offensive with minimal losses to themselves, before launching an armored blow to encircle and destroy the invading Red Army, subsequently advancing into Soviet territory. This would be reminiscent of what happened during the Soviet offensive towards Kharkiv in the spring of 1942, only far worse for the Red Army.

Unlike in the first weeks of Barbarossa, the Germans would have destroyed not only the Soviet forces on the frontiers but also a large number of the reserves that had arrived to fight in the battles of Smolensk and Moscow historically. In one fell swoop, much of the Soviet Union would have been rendered helpless to German invasion, reliant on hastily trained fresh recruits to defend Moscow with the bulk of the Red Army’s reserves and equipment having been destroyed in Zhukov’s debacle.

Stalin would have had no choice but to muddle through, the Germans could not be negotiated with, but hopes of help from the outside world might have been more dubious than they were in our time. The British public were broadly supportive of the Soviet cause, but here the anti-communist figures within the British establishment could have pointed to the fact that Stalin, not Hitler, had started the war and that the German dictator was merely acting as the “bulwark against communism”. The American public, with its strong isolationist movement, may very well have concurred.

Conclusion: A bolt from the blue

Although the notion of a Soviet preemptive strike is a tantalizing one, there is a reason why it’s relegated to the realms of conspiracy theory and Nazi apologia. Such a strategy would have been too great a gamble even for those prone to take risks, an attitude that was alien to Stalin. Although the potential rewards of such a move where not inconsiderable had things gone wrong, it may have led to a scenario where German victory in the Second World War suddenly becomes rather more credible.

Ironically, the best chance the Germans had of victory may have been if the Soviets had prevented Barbarossa from happening in the first place.

I had initially intended to finish this series here, and I hope that you’ve had as much fun reading it as I have had in writing it, but it occurred to me that if the Germans might have benefited from Barbarossa being cancelled at the last moment, what if the Germans had abandoned the idea entirely?

All that remains to be said, for the last time, is find out next time!