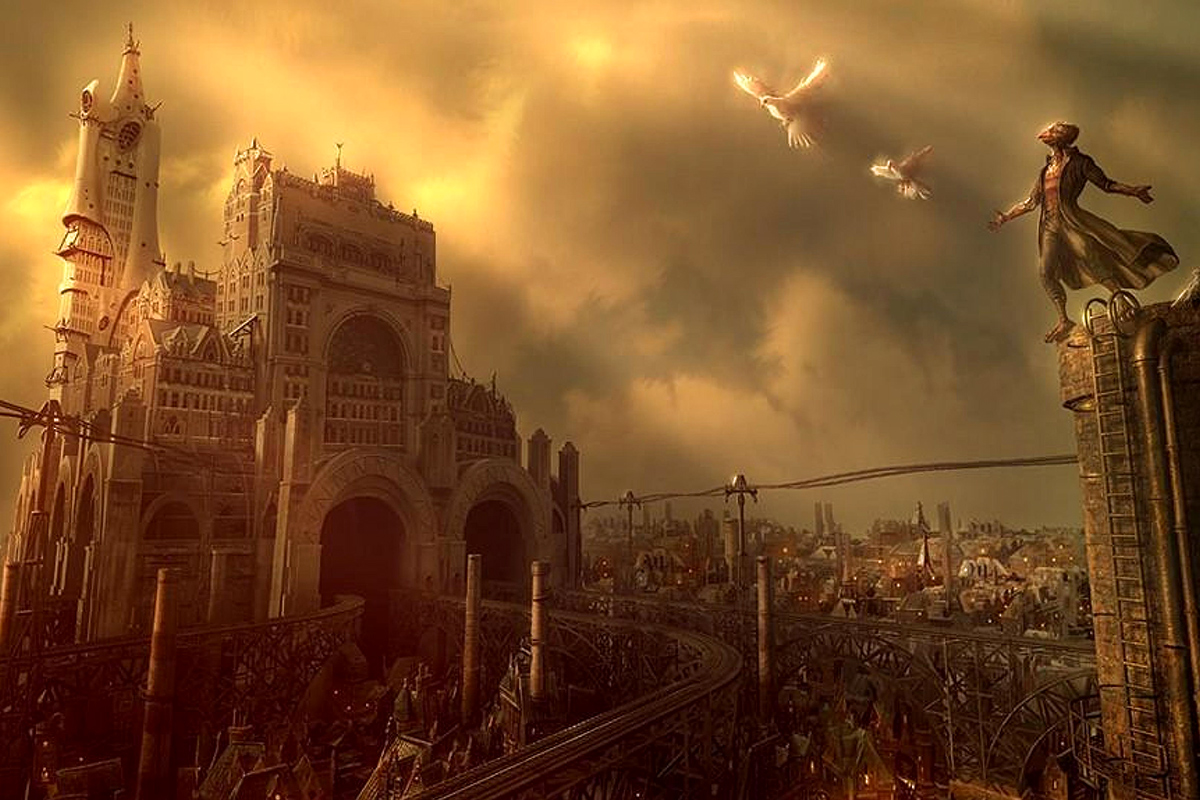 Deepgate in Alan Campbell’s Scar Night (2006) is a steampunk city that hangs on chains above a seemingly bottomless pit. The city is crisscrossed with chains and is a wonderful setting for a steampunk showdown. Deepgate holds at its center a monastery that houses the last of a line of angels. It makes for an interesting visual and makes Scar Night a good read.

The reason Deepgate was built over a hole in the middle of a desert is because a god dwells below. When a person dies, their bodies are dropped into the hole to save their souls. However, the faith of the Deepgate residents might just be misplaced…

Armada in China Miéville’s The Scar (2002) is a floating pirate city in the world of Bas-Lag. It is composed of the corpses of ghost ships powered by moonlight and clockwork.

The city of Armada is one mile in diameter and moves across the ocean. It is a prison for the main characters of The Scar.

Armada grows in intrigue as they raise an ancient creature known as avanc to propel the city through Bas-Lag’s oceans.

Middlesteel in Stephen Hunt’s The Court of the Air (2007) is the capital of the Kingdom of Jackals. It is a steampunk city with skyscrapers made possible by a structure supported by pneumatic air pressure.

Middlesteel is home to many different species of humanoids, including the steam-men, a race that might remind readers of Tin Man from The Wizard of Oz.

New Crobuzon is the most powerful city in the land of Bas-Lag in Miéville’s Perdido Street Station (2000). Built under a mysterious and ancient giant rib cage, the city is populated by both humans and nonhuman races and is under the authority of a fascist militia.

The city is positioned between two converging rivers: the Gross and Tarr, which merge to become the Gross Tarr.

The Seattle of Cherie Priest’s Boneshaker (2009) is very different from the Seattle we know. During the Klondike Gold Rush, an inventor accidentally activated his mining device, the Incredible Bone-Shaking Drill Engine, or “Boneshaker” for short, in the city, releasing a subterranean gas that kills anyone who breathes it and turns corpses into zombies.

A wall is built to contain the gas within the affected part of the city, which still stands sixteen years later during the events of the novel.