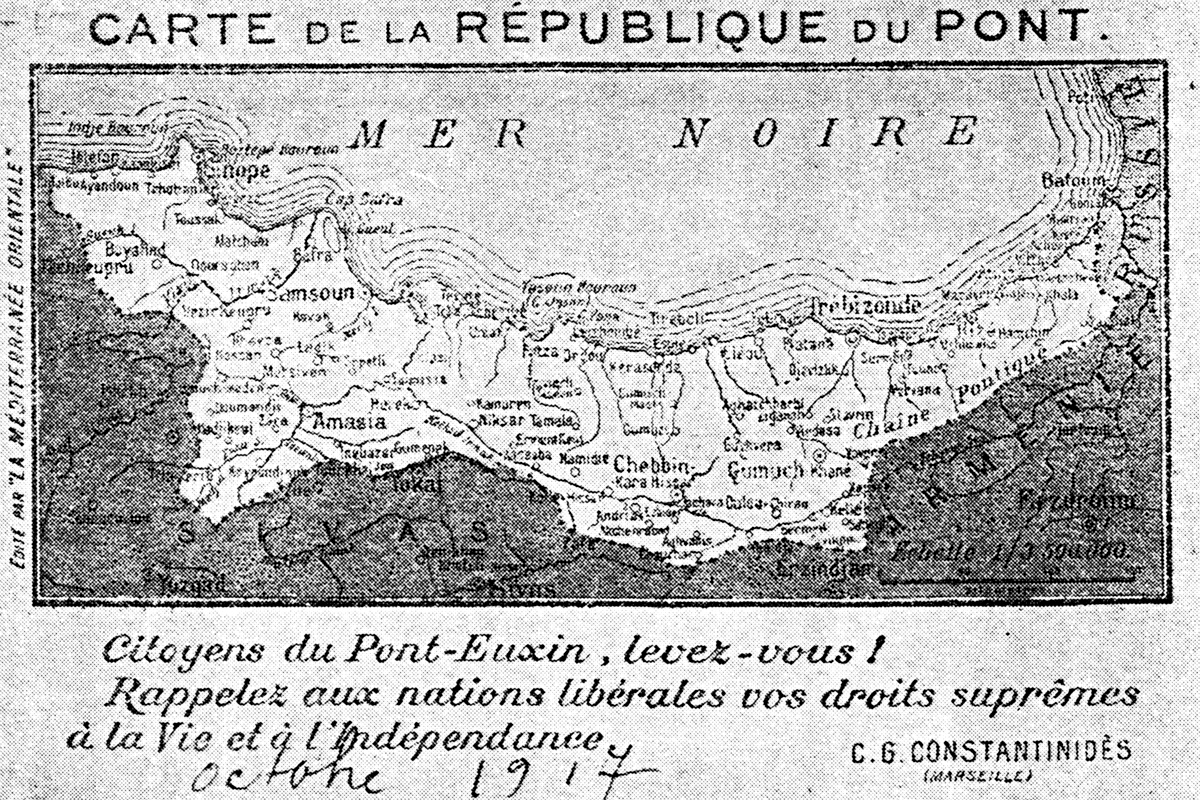 When the Belgians rebelled against their Dutch masters in the 1830s, the European powers were initially reluctant to recognize an independent Belgium. France favored separating French-speaking Wallonia from Dutch-speaking Flanders in hopes of annexing the south. This was rejected by the other powers, who had joined the formerly Austrian-ruled Belgium with the Netherlands at the Congress of Vienna in 1815 in order to create a strong buffer state against French expansionism.

The French statesman Charles-Maurice de Talleyrand proposed a smaller annexation: France would take the provinces of East Flanders, Hainaut, the south of Brabant and the west of Namur; the north of Brabant would go to the Netherlands; Prussia would take all territory east of the Meuse River. Antwerp, Ghent and the rest of West Flanders would become an independent Free State under British protection.

Nothing came of the proposal. It was the sort of drawing lines on a map without regard to the wishes of the people living on the ground that had created the unhappy marriage of Belgium and the Netherlands in the first place. The great powers decided to recognize Belgian statehood instead, with Britain acting as the guarantor of its neutrality. (When Germany violated that neutrality in 1914, it triggered Britain’s entry into World War I.)

The Intermarium (“between seas”) was a Polish proposal for the federalization of Central and Eastern Europe.

Poland’s post-World War I leader, Józef Piłsudski, was the most prominent proponent of the scheme, but it dates back to the early nineteenth century. Adam Jerzy Czartoryski, a leader of the 1831 Polish revolt against Russia, also supported it.

The Soviets opposed it, because they wanted the Baltic states, Belarus and Ukraine for themselves. The Western Allies were against it, because they assumed Bolshevism would eventually collapse and they still thought of Russia as a counterweight to Germany. Many of the federation’s prospective members saw it as a thinly-veiled attempt to resurrect the Polish-Lithuanian Commonwealth.

Twenty-first-century Poland has revived the idea of a strong Central Europe that can counterbalance both Western Europe and Russia in the form of the Three Seas Initiative.

Following the Russian Revolution, and Imperial Germany’s occupation of the tsar’s former Baltic possessions — formalized in the Treaty of Brest-Litovsk — the German-speaking nobility in the region called for a personal union with the Crown of Prussia. Two duchies, of Courland and Semigallia and of Estonia and Livonia, consisting of seven cantons, were to be ruled by Duke Adolf Friedrich of Mecklenburg.

Emperor Wilhelm II recognized the United Duchy on September 22, 1918, but no other state did. When Wilhelm abdicated two months later, the German government recognized the independence of Estonia and Latvia. The Baltic Germans, supported by an anti-communist Freikorps from Germany itself, tried to hold onto power, but they were defeated by local opposition and a British expeditionary force.

After the end of World War I, American president Woodrow Wilson proclaimed that all the nationalities of the Turkish Empire had a right to autonomous development. This prompted the Pontic Greeks to call for independence.

Ethnic Greeks had lived on the southern coast of the Black Sea for centuries, first under Byzantine, later under Ottoman rule. When Greece became independent in 1832, and Pontus was not included, many of the region’s inhabitants relocated to Orthodox Georgia and Russia.

Those who remained suffered discrimination and violence for almost a century. Hundreds of thousands of Pontic Greeks are believed to have been killed during the period of the Ottoman Empire’s collapse.

Without a powerful ally at the Versailles Peace Conference, the Pontic Greeks got nowhere. Prominent supporters of independence were later hanged by the Turks.

The 1923 Treaty of Lausanne, which finalized the border between Greece and the new state of Turkey, provided for population transfers between the two countries. Some 200,000 Pontic Greeks were displaced. Many resettled in the Soviet Union. After its collapse in 1991, many moved to Greece, a country they had never before set foot in and whose language they did not speak.

The Great Depression gave various new political philosophies a lease on life. Chile lurched to the far left. Brazil and Portugal turned to the corporatist right. Germany elected the Nazis. In Canada and the United States, the technocracy movement arose. It proposed replacing all politicians with economists, engineers, scientists and businesspeople.

Franklin Delano Roosevelt’s New Deal, which was also premised on expert control of the economy, took the wind out of the technocrats’ sails. In Canada, the movement was even outlawed.

The most prominent advocacy group was Technocracy Incorporated, founded by Howard Scott. It wasn’t very popular and — in what certainly didn’t bode well for their ability to govern — ridden by factionalism.

Their farthest-reaching proposal was to unite Central and North America into a “technate”, their argument being that the natural boundaries and resources of the area stretching from the Arctic to Panama made it “an independent, self-sustaining geographical unit.”

“Major Major”, a member of the Alternate History forum, imagines what a technocratic government of North America might have looked like. It’s not pretty.

Burgundy, now a region in central France, has historically been all over the map of Western Europe. The medieval Kingdom of Burgundy straddled the Mediterranean coast. The Duchy of Burgundy, at its greatest extent, ran from the Low Countries in the north to Lake Geneva in the south. The Burgundian Circle was part of the Holy Roman Empire.

During World War II, SS chief Heinrich Himmler argued for the restoration of an independent Burgundy — outside the Greater German Reich, which would colonize the northeast of France, but under National Socialist rule.

Himmler imagined himself as regent. Léon Degrelle, the leader of the Belgian fascists, was supposed to become the state’s first chancellor.

SS Burgundy would encompass what are today the Champagne, Franche-Comté and Picardy regions of France, giving the state access to the English Channel, as well as French Switzerland and the Belgian provinces of Hainaut, Luxembourg and Nevers. Either Dijon or Nancy would have been the capital.

It’s unclear how supportive Adolf Hitler was of Himmler’s dream. Little serious planning appears to have gone into this.

An alternative to the Intermarium, the Balkan Union would have seen Greece and Yugoslavia leading the way in federating the Balkans and Central Europe.

The plan was concocted by Britain’s wartime foreign secretary, Anthony Eden, who convinced the heads of the Greek and Yugoslav governments-in-exile to take the first step. His hope was to draw Nazi-allied Albania, Bulgaria and Romania into the union after the war.

The Greek and Yugoslav monarchies were to be merged by marrying Princess Alexandra and King Peter II.

The third step would have been to combine the Balkan Union with a Polish-Czechoslovak Confederation and create an enormous buffer state between Western Europe and Soviet Russia.

The plan was abandoned after a year, when the Allies decided to support Josip Tito’s communists in their fight against the Nazis.

After the war, Tito moved Yugoslavia into Russia’s orbit. American and British support for the royalists in the Greek Civil War kept that country in the Western camp.

Alexandra and Peter, who did marry, never set foot in Yugoslavia again.

Leftists had been discussing their own plans for Balkan confederation.

The earliest proposals, for a socialist federation stretching from the Alps to Cyprus, date from 1885.

The 1910 Balkan Socialist Conference in Belgrade called for workers’ unity in the face of the coming war.

After the Bolshevik Revolution, the Soviet Union’s Comintern actively promoted a Balkan Federative Republic of Bulgaria, Greece, Turkey and Yugoslavia.

The closest the plan came to fruition was after World War II, when the Bulgarian and Yugoslav communist leaders, Georgi Dimitrov and Tito, tentatively agreed to merge their countries. This was interrupted when Tito fell out with Soviet leader Joseph Stalin in 1948 and Bulgaria was compelled to follow Moscow’s line.

Britain reneged on its promise to give the Arabs a homeland after the First World War. Instead, it and France created the kingdoms of Iraq and Transjordan, ruled by the brothers Faisal and Abdullah, respectively, as well as Mandatory Palestine under direct British rule and Mandatory Syria under the French.

During World War II, Syria fell under the control of Nazi-allied Vichy France. Syria declared itself independent in 1941, but this wasn’t recognized by the Western Allies until 1944.

Sensing an opportunity for Arab unity, Iraq proposed bringing the four countries together. It was called the Fertile Crescent Plan.

It wasn’t popular in Syria, though, where there was little desire to live under a pro-British king.

The two Hashemite kingdoms briefly entered into an Arab Federation in 1958, but Faisal was deposed six months later and the Free Officers who replaced him dissolved the union.

The dream of a single Arab state didn’t die. Muammar Gaddafi spent his first decades in power attempting to unify the region. He convinced Egypt and Syria to join Libya in a Federation of Arab Republics in 1972, but it collapsed five years later. Between 1978 and 1987, Gaddafi’s army routinely intervened in neighboring Chad with the goal of bringing that country into Libya’s fold.

In the early 1970s, Gaddafi set his sights on Tunisia. Visiting Tunis, the Libyan leader rallied support for a merger of the two North African states.

Tunisia’s Habib Bourguiba was suspicious. The president, in power since 1957, worried that, with Libya in a federation with Egypt, merger would only expand Egypt’s influence westward.

For unknown reasons, Bourguiba came around in 1974. He signed a declaration with Gaddafi on the island of Djerba that year which committed the two countries to unification. The plan was for Bourguiba to become the president of the joint republic and Gaddafi the head of its combined armed forces. Referendums were meant to ratify the accord, but internal Tunisian as well as Algerian opposition scuttled the deal within days.

French-speaking Quebec came close to seceding from Canada in 1995, when 49.4 against 50.6 percent of its residents voted for independence. Separatism has since waned, but Quebec retains its own identity.

The area was part of eighteenth-century “New France”, which stretched all the way south through Louisiana (named after King Louis XIV) to New Orleans (after the French city of Orléans). After France’s defeat in the Seven Years’ War, it traded its Canadian possessions with Britain for Guadeloupe.

The British allowed the settlers to continue living under French civil law and practice their Catholic religion, gestures which helped prevent the sort of revolutionary sentiment that was brewing in the Thirteen Colonies.

Nowadays, the French language and French-Canadian culture are protected by the Canadian Constitution.

It wasn’t until the middle of the nineteenth century that the United States started to incorporate the territories west of the Rocky Mountains. Some of the early settlers favored independence. As late as 1860, arguments were made for a “Pacific Republic”. A separatist movement was active in Oregon before the Second World War.

In more recent years, the Pacific states on either side of the American-Canadian border have cooperated on matters of commerce, environmental policy and transportation.

The regions are abundant in natural resources and home to some of the world’s largest companies, including Amazon, Microsoft, Nike and Starbucks. Combining British Columbia, Oregon and Washington state would create a viable nation of sixteen million. The progressive, eco-friendly sensibilities of Portland, Seattle and Vancouver would also go well together, but the constitutional obstacles to first seceding and then combining are probably insurmountable.