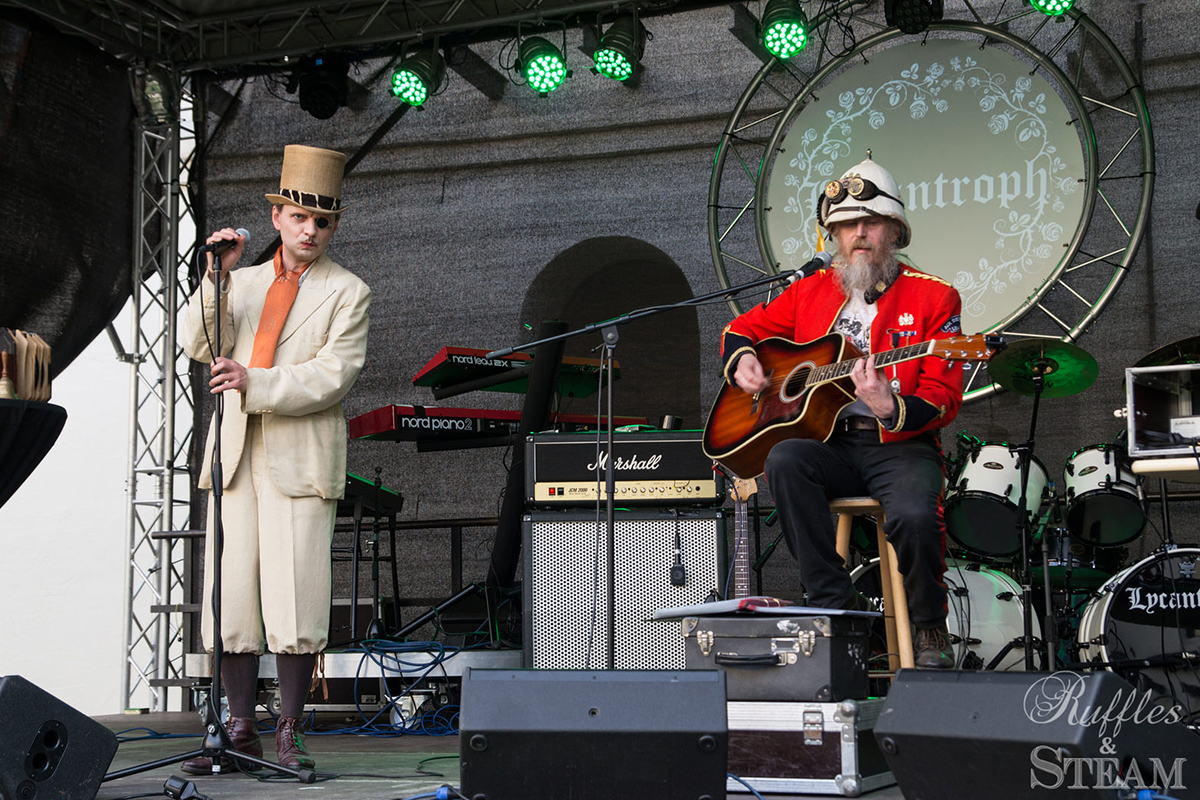 Although the 24th edition of the world’s largest Gothic festival took place two weeks earlier then last year, the weather meant good with the over 20,000 visitors who invaded the city of Leipzig last month.

The diverse program started on Thursday evening with the first opening parties.

The WGT Friday is normally reserved for the Victorian picnic organized by Viona from Viona-Art. But due to the increasing numbers of photographers, she and her husband decided to change the event to make it more exclusive for guests.

Not part of the official WGT program, they held the first edition of Viona’s Victorian Village at the panometer arena. Entrance was free but regulated by dress code, so no paparazzi tourists could enter.

The Victorian Village offered a more private atmosphere as well as stage programm, including historical dance lessons, a costume contest and music performances. The first acts of the latter were especially interesting for steampunks as the well-known German Chanson-singer Daniel Malheur joined forces with Dale Rowles from BBBlackdog (UK).

There still was a dark-romantic picnic (which was also part of the official program) at the Clara-Zetkin park and, because at both location the program was day-filling, one could alternate between the two.

For steampunks, it might be an advantage that Viona moved the place and event on Friday, so they only had one picnic to prepare for: the steampunk picnic on Saturday.

Taking place for the forth time in its short history, it again changed location due to difficulties of access last year. This time the steampunks met at the Palmengarten and there was an overwhelming number of over 300 fellows that attended.

The picnic organization had brought some tables so the guests could share their food at a buffet instead of eating alone. There also was an acoustic set of German steam metal band Aeronautica.

The program didn’t stop here: Author Anja Bagus did a scenic reading from her Aetherworld novels and I presented Das Große Steampanoptikum by Alex Jahnke and myself, a compendium of steampunk in Germany in full color and A4.

Although the WGT offers over 300 different artists and bands, there was none explicitly steampunk. Only the reading of the well-known German steampunk author Anja Bagus at the Heidnisches Dorf and at the VEID might fall into this category.

Of course, you don’t need steampunk bands to enjoy Wave Gotik Treffen as a steamer. The Gothic subculture is very open when it comes to sepia-colored folks. (Maybe because they are still a bit overwhelmed by the cyberpunk scene.) No need to mention the huge overlap between Gothic and steampunk here.

A huge variety of bands of different Goth subgenres, locations, markets and parties was offered and free for owners of a WGT “Bändchen” (wristband).

Every year, there are the huge locations like the agra concert hall and the Moritz Bastei, but also a changing amount of smaller locations. For example, it was the first time this year that there were readings at the “Riverboat Kulturhafen”.

The different locations of the program are one major feature of Wave Gotik Treffen as well as the cultural institutions like museums, opera and theater joining in the WGT program and offer free entrance, special guided tours or free seats for the visitors.

To keep track of the program, you could either use the big paper plans given to every visitor at the cash points or use the WGT program app.

Due to the lack of special steampunk events, I focused a bit more on the vendors at the main Gothic market at the agra hall.

Larger stalls sold trading goods such as corsets, blouses and skirts and also most bigger Gothic vendors seemed to have one or two steampunky corsets between the black ones. But this year, there was also a noticeable amount of smaller craftspeople coming from all over Europe.

Of course there were more vendors selling steampunky stuff, but there wouldn’t be enough space for all of them! (You can find more pictures of the sellers and their items mentioned above here.)

I was overwhelmed by the diversity of those vendors. Although they all sold smaller steampunk goods and accessories, each of them had their own style and they all showed how creative steampunk can be. It was a blast to see so many craftsmen instead of all the big companies trying make money out of the steampunk “trend”.

I had the same impression at the steampunk picnic: although there were so many steampunks, they all had their unique way of interpreting the genre.

I hope to see more of this next year when the WGT turns a quarter century old!

Click here or here for more pictures of visitors and outfits.