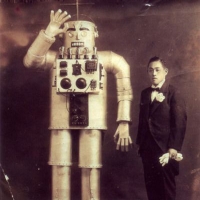 Chicar
June 2010 in Diesel
First thing first, i present that by scientific interest only. Its basicly Miley Cyrus believing she Brithney Spears, but still, in the strict cinematographic sens, its a very good dieselpunk story:
http://www.youtube.com/watch?v=sjSG6z_13-Q